Ford Motor Co on Tuesday began regular production of its F-150 Lightning electric pickup, the most prominent sign of the 119-year-old company’s transformation for the new century.

Ford workers, executives and a group of F-150 Lightning customers gathered at the Ford Rouge Electric Vehicle Center in Dearborn, Michigan, marking a sharp acceleration in the assembly system. Ford has been building Lightning for weeks, parking them on lots around Dearborn headquarters.

The automaker plans to build just 40,000 Lightning trucks a year, but surging demand for electric vehicles has prompted Ford to increase planned production twice since last August. The company is gearing up for a new part of its Rouge manufacturing plant, producing 150,000 heavily modified versions of its best-selling F-150 pickup truck each year.

In a dig at rivals from Tesla to General Motors, CEO Jim Farley said Lightning will be “thousands of dollars cheaper than our competitors’ trucks — whenever they go on sale.”

About 200,000 customers booked the Lightning before Ford stopped taking initial orders in December. 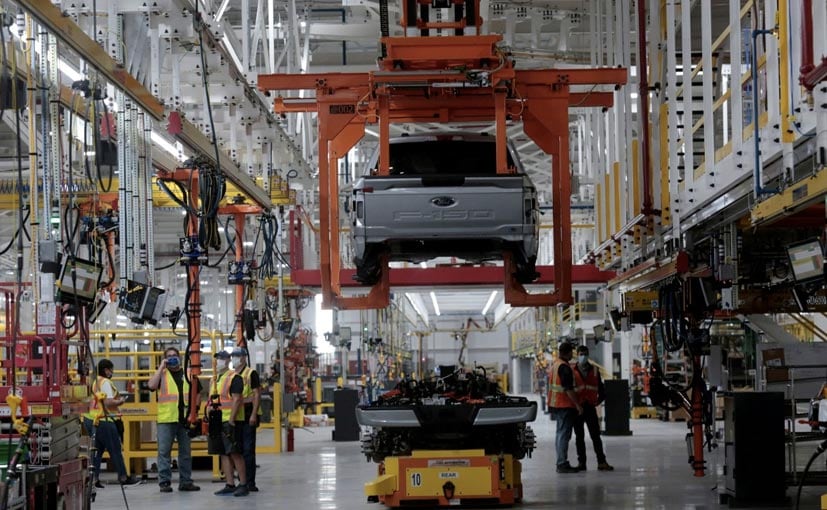 Farley said Lightning will hit showrooms “within a few days.” That would be behind startup Rivian’s electric R1T pickup, but well ahead of GM’s electric Silverado, Stellantis NV’s promised electric Ram truck and Tesla’s Cybertruck, which has been delayed until next year at the earliest.

Ford will eventually build the Lightning truck at an electric vehicle production facility in Tennessee that will open in 2025 and will be much larger than an expansion of its Rouge plant.

Rivals GM and Ford are taking different tacks in the electric pickup market. Ford has redesigned its existing F-150 to install batteries, a cargo front trunk and enough electrical outlets to power a home or construction site. An assembly line was built near the existing Rouge F-Series plant, which took 19 months.

GM spent more time designing its electric Silverado from the wheel, tearing down a factory in Detroit to make it and several other electric vehicles, and building a new factory to supply the cars with GM-designed batteries.

Chevrolet will launch an electric version of the Silverado for commercial and work customers in spring 2023, followed by a consumer model in the fall.

Executive Chairman Bill Ford told reporters after the event that he was still urging the Biden administration and Congress to provide more federal support for electric vehicle sales and U.S. battery and battery mineral production.

“Are we going to make sure we have a U.S. supply base for EV batteries?” asked Ford, the great-grandson of company founder Henry Ford.

The automaker is considering investing directly in the production of battery materials, he said. He also said that supply chain issues hindered the company’s growth, just as a tough line of defense stopped the momentum of a football team.

“We haven’t done any open-air running in two years,” he said.